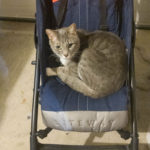 If you follow me on Instagram, you know that once in a while I post photos of my furry buddies, Buzz and Domino.  Buzz is the elder cat, a large poly-dactile gray tabby from the Austin Animal Shelter.  TD and I were pet-less after our sweet dog Rocky died a few years earlier.  It was time to change that status, and Buzz became our little buddy.  Buzz acts a lot like a dog, and follows me everywhere I go.  Buzz got a little lonely after TD passed away, and his solution was bringing home a friend.  Enter Domino.  Domino was hanging around the neighborhood and Buzz ‘invited’ her to our yard.  With so many predators around, I made her a bed and fed her on the deck for a few days, while I searched for her family.  After several days, I brought her into the house, which Buzz found both annoying and awesome.  But Buzz was much calmer and happier having someone else to play with.  They are now besties and run up and down the stairs, fight for my attention, and sleep snuggled up together as if they were litter mates.

With cats and other pets several things are required for their lives.  Now that both cats are in the ‘senior’ cat category, their diets have changed, as well as other needs.  I don’t like spending money on what is supposed to be the best or trendiest foods.  So when Buzz came into my house, he was started off with cheap grocery store food, and soon switched to the classic Purina Cat Chow.  After the multiple recalls of the fancier pet foods, I did some research and learned that Purina is made entirely in America with American products.  And he really likes it.  His weight has stayed stable, and at 14 he’s still pretty active.  So Domino got the same treatment.  Now, with age Buzz like me seems to have developed a grain intolerance so they are now eating Purina Beyond Grain Free foods.  After several trials, I found treats for both as well. I found Purina Beyond Grain Free Treats in a package of two!  Domino loves the Ocean Whitefish, and Buzz is a classic chicken and egg snacker.

The cats currently in my house have very distinct preferences in the toy box.  Buzz likes to take it over and sleep in it, on top of all the toys.  He will dig until he finds the perfect feathered stick to drag around the house, and up the stairs in the middle of the night.  Domino has a love of fuzzy catnip toys, the mousier looking the better!

Buzz loves to play fishing for cats.  This is a great toy for a bored cat.  The retractable Teaser cat toy is great.  The feathers and toys are easy to change and it’s great for play inside or outside.  It’s good for cat-human interaction.  If Buzz is feeling generous, he lets Domino play too!